(Courtesy of Frank Stanko at the Wahpeton Daily News)

Pat Stern has followed one principle throughout her career in healthcare: it’s always been about the people. Stern’s retirement after 61 1/2 years with St. Catherine’s Living Center in Wahpeton was celebrated Tuesday, Jan. 21. Despite the milestone, the registered nurse turned licensed social worker is not completely shutting the door on providing care. “I have to come back and volunteer,” Stern said. “The job’s been about the people, my residents and my families. That was always my goal.” 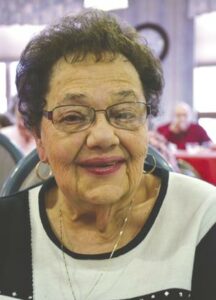 St. Catherine’s Living Center is part of the Benedictine Living Community of Wahpeton. Jim Cornelius, the community’s administrator, reflected on Stern’s decades of service. “Look at all the different people who have been in this building. Look at how many lives she’s impacted over the years. She has been a staple in this community,” he said. Stern shared her party with family, longtime colleagues and community members. “She took care of my grandpa, John MacDougall, in the 1960s,” Sandy Olson said. “She was his favorite nurse.” Born and raised in Breckenridge, Minnesota, Stern graduated from Breckenridge High School before attending what is now North Dakota State College of Science. She went on to attend the University of North Dakota. “I went to the university for nursing,” Stern said. “I didn’t get the four-year degree because both of my parents were ill. I did get the license and became a licensed registered nurse. I did that for many years — until 1984 — and I stared in 1958.” Margaret Nash, the longtime head of St. Catherine’s, asked Stern in 1984 if she would take on the role of social worker. A whole new chapter of Stern’s career began from there. Pam Meyer, the Benedictine Living Community’s activities director, has been Stern’s colleague since 1977. For the first few years, the two women worked in separate facilities and didn’t interact much. “She’s been just a wonderful advocate for our residents,” Meyer said. “She’s the first person to step up to the plate on anything. She’s well known in the community. I can’t say enough about Pat.” Through the years, Stern has worked with many social workers. The one she got along with the best was Barb Mohs, whose career included many years running Pioneer Senior Cottages. “She’s a gem,” Stern said. “She said, ‘You know, I always thought it was about the people, to make them happy.’”

In 1998, Stern was named North Dakota Caregiver of the Year by the Long Term Care Association. “So many people, when they think of here, they think of her as well,” Cornelius said. “We are so appreciative of her time and talents.” A mother of two and grandmother of four, Stern couldn’t resist joking around at her retirement party. “I don’t know what the record of years for employment with a place is, but you’ve got to be pretty darn close,” Cornelius said. “I’m too dumb to quit,” Stern said. The conversation turned serious and sincere. “Thank you. That’s all I can say, ‘Thank you,’” Stern said. “I’m going to miss everybody, but I’ll be back to volunteer. I’ll be seeing you.”