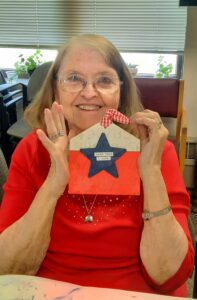 Most anybody that has had the honor of living in Crookston the past few decades has more than likely enjoyed  catching Liz Thompson in action sharing her singing and musical talents in the community.

Liz’s life journey began in Fargo.  Both her older sisters were in high school when Liz was born. Her Grandparents spoke only Norwegian so communicating could be challenging at times.   Liz’s virtuoso was apparent quite early; she began her “solo career” at 5 years old when she sang “Jesus Loves Me” for her church.  She played violin in Orchestra and sang in the Choir through school.

Liz met her husband Ron when she was a freshman at Moorhead State University in Teachers School.  They married in 1953 and went on to have 5 children; Barbara, Beth, David, Jennifer and Karen,  5 grandchildren and 11 great-grandchildren.   While living in student housing the Thompson’s connected with lifelong  friends Ed and Nancy Melbye.  Careers in teaching brought both families to Crookston.

As a busy wife and mother, Liz enjoyed her work and volunteerism.  She was an integral part in the formation and continued development of the DAC, an organization that has touched the lives of many in our region.  Liz was often called upon to sing at weddings and funerals.  The Crookston Community Theater productions, frequently set the stage for Liz to share her accomplished theatrical skills and gifted vocals (who can forget her performance as Mother Superior in the Sound of Music, 1983?) Liz’s daughter Karen adds, “you would often hear mom singing or playing piano, Broadway tunes and hymns were her favorite.”  Liz was active at Trinity Lutheran Church on the music and worship board, the Praise Singers, the Performing Arts Board and Artist Series.

Reminiscing holds close to Liz’s heart. She values her longtime friendship with her childhood friend Audrey, whom she met in Sunday School, they  still remain very close today.   Liz was honored to be the Golden Link featured “Older American” and enjoyed the many parades and fairs representing Crookston.   A trip to Norway with daughter Beth  was also a real highlight as well as many other travel experiences.  When asked if she had advice for other moms, Liz was eager to offer, “Always listen and talk to your children; and make sure they get a good education and religious upbringing.”

Liz’s mom Bessie lived in the former Villa’s “Board and Care” many decades ago. While Liz loves her “beautiful apartment” at The SUMMIT and the “sense of community” she adds she is very thankful that the most difficult part of the pandemic is past us as it could be lonely without all of her family; but she was thankful for her friends at The SUMMIT to visit with.  Liz enjoys that youngest daughter Karen is the Activity Director for Benedictine.   “We are ever so thankful to have both talented Thompsons here at Villa St. Vincent and The SUMMIT.” Adds Administrator Judy Hulst.

During the month of May 2021, in honor of Mother’s Day, The SUMMIT AL is highlighting tenants who have children/grandchildren who work at Benedictine.