Beatriz Rogers is a math teacher in her mid-60s whose mental acuity slowly gives way to Alzheimer’s disease — a neurodegenerative disease that afflicts about 5.5 million Americans. During a virtual reality lab that tracks her decline over 10 years, caregivers and others have a chance to experience her cognitive impairment.

Employees of Benedictine’s Saint Anne of Winona, Minn., and Madonna Living Community of Rochester, Minn., have completed the interactive training module that features the fictitious Beatriz. The module was created by Embodied Labs of Los Angeles.

Dr. Neal Buddensiek, the chief medical officer of Benedictine Health in Shoreview, Minn., said the virtual reality offering is recognition that many nursing home residents live with some level of cognitive impairment or dementia and that its staff-training content needed an upgrade to support compassionate, empathetic interactions with these patients. Training is offered to members of the interdisciplinary team — from “culinary to environmental services to the frontline care providers,” Buddensiek said.

So he fed the terms “virtual reality” and “dementia care” into the Google web search engine. That is where Buddensiek found Embodied Labs. He reached out to the company’s chief executive, Carrie Shaw. Buddensiek and Shaw held several virtual meetings and he was impressed with the company’s training content for health care staff. He collaborated with Shaw on a keynote presentation at Benedictine Health’s annual leadership meeting about providing support and comfort to those living with dementia.

“That was sort of how we vetted them,” Buddensiek said.

Art of communication
Shaw was 19 when her mother — then in her late 40s — was diagnosed with early onset Alzheimer’s disease. Shaw, her sisters and their father took turns being at home to care for her mother, while Shaw earned her bachelor’s degree in public health from the University of North Carolina.

After graduation, she joined the Peace Corps and was posted to the Dominican Republic. There, she learned the power of art in communicating health concepts.

“I didn’t speak Spanish,” she said. “I didn’t really know the culture. And my job was to teach teenagers reproductive health.”

She learned to draw and used a lot of visual communication to overcome some of the language, cultural and education barriers. (She ultimately learned Spanish during her two years and three months in the Dominican Republic.)

Biomedical visualization
Shaw returned to the United States and moved in with her parents, knowing that she ultimately wanted to go to graduate school and become a medical illustrator. By now her mother required more assistance than she and her father were capable of providing. They decided to hire home health aides. Again, Shaw found that it was more effective to show rather than tell her mother’s caregivers about her mother’s physical challenges.

For example, by strategically placing blue tape over the eyepieces on a pair of safety goggles, she was able to simulate her mother’s left visual field deficit. “Those kinds of things really quickly translated for us into better care practices for my mom,” she said. “That’s like the earliest prototype of what we do at Embodied Labs.”

Shaw, who went on to earn her master’s in biomedical visualization from the University of Illinois – Chicago, founded Embodied Labs. The company’s approach to virtual reality extends beyond building empathy among caregivers to teaching people about the patients’ conditions. 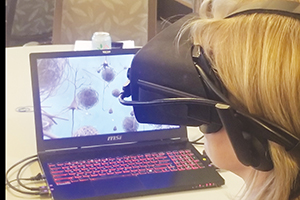 “The majority of us learn by certainly more than just reading or listening,” Buddensiek said. The virtual reality technology is becoming more portable and affordable, so Buddensiek expects it to have growing use for professional and family caregivers.

Beatriz lab at Benedictine
Buddensiek said the first Benedictine Health cohort to be trained with the Beatriz module included employees at Saint Anne in Winona and Madonna. The Saint Anne administration secured a grant to get more virtual reality headsets, giving them a total of eight.

Buddensiek said that in addition to having its own staff attentive to the dementia patient’s experience, Saint Anne is “driving for more of a dementia-friendly community” by offering the training to patients’ families and community members.

The virtual reality Beatriz training module simulates early, middle and late stages of Alzheimer’s disease. During the virtual reality lab, trainees experience what it is like to have short-term memory loss, and impairment of their ability to process speech and language or to perform simple tasks, such as cutting a potato for Easter dinner.

As Beatriz goes through the later stages of Alzheimer’s, trainees experience her anxiety as day turns into night. The module simulates auditory and visual hallucinations. It also delves into caregiver burnout.

Embodied Labs has an advisory board through the Dementia Action Alliance that includes people with cognitive impairment.

The company also has developed virtual reality training modules that deal with macular degeneration and hearing loss, and end-of-life conversations. Producing one of the immersive training modules involves interviews with about 100 subject matter experts, who range from neurologists to medical researchers, Shaw said.

Embodied Labs, a for-profit company, has about 100 health care providers paying an annual fee to use its training modules, Shaw said.